Catholics hail Francis de Sales as the patron saint of writers. But for me, C. S. Lewis claims that undisputed, if unofficial title. That’s why when I saw Corey Latta’s book C. S. Lewis and the Art of Writing, I had to get it! After skimming the book and reading the first chapter, I’d say it’s a keeper. His opening chapter highlights Lewis’s childhood love of books, showing that all good writers are born of good reading. As a closing exercise he suggests we think about our early experience with books, and how it influenced our foray into writing. When did we first start reading? What was the book culture in our homes like? He then asks us to write about our first memories of books, describing what role they played in the birth of our imaginative life. Of course, he challenges us to be “personal, insightful, and creative.” Well, here’s my attempt, just for grins and giggles:

Compared with the rich literary feast C. S. Lewis enjoyed, our home’s book rations were more Spartan. Though looking back on it now, they were sufficient enough. The Bible loomed large. The literary quality of the King James Version eventually grew on me, but back then, its Elizabethan English often struck me as more of a riddle than revelation. Beyond the Bible, standard reading fare included Field and Stream Magazine and the odd mass-market paperback. Even now, I can see their cheesy covers and smell their musty brown pages. Titles like Corrie ten Boon’s The Hiding Place and some novel called Flowers in the Attic festooned the lamp stand where Mom sat.

We also owned a descent catch of children’s books. Time and again I turned the pages of Clifford the Big Red Dog, Ferdinand the Bull, along with a hodgepodge of hand-me-downs from the 1960’s and 70’s. I believe some dark enchantment possessed one of those books. It had a Halloween theme with a creepy goblin that still haunts me. Somehow that darn goblin found a home in the deep recesses of my mind, kind of like the Orces hiding in the bowels of Tolkien’s Mordor, plotting some new devilry. Occasionally, I recall the picture of that pale green goblin sitting on a branch outside some kid’s window, and I still get a strange feeling! Last Christmas I happened upon that book in my parent’s basement. The spell had weakened a bit, but there was still a tinge of creepiness about it. Nevertheless, I left it buried among those old books down where it belongs.

Our church had a library of sorts, but precious little on its menu appealed to my tastes, and apparently few adults, as I recall. As a kid, the old moldering volumes looked like stale loaves with maggots, and just as appealing. I found out later that the “maggots” were just termite larvae. A lavishly illustrated Children’s Bible proved the only book that drew my attention. Its picture of Christ’s Temptation captured my imagination (Matt. 4). The artist styled Satan in the stereotypical fashion, complete with horns, goatee, and cleft feet. But don’t think of the cubby red guy with pitchfork and tail. Think instead of a 1930’s gangster in a flowing toga with slick back hair, sharp stash, and fingernails, leaping from the mountain with swine’s feet. As a child the picture’s creep factor was fantastic. But looking back now, all of the images had that small fundamentalist vision, displayed especially in the way they depicted Jesus as a WASP with blue eyes and blond hair.

I recall trips to the public library too. The only book I ever checked out was a big book on snakes. Its checkout card, I’m sure, displayed my name the most. By now, someone is thinking, “Goblins, the Devil, serpents! . . . Did the antiphonal chants from Damien accompany your book browsing? Does the blood of a jackal coarse through your veins?” I’m pretty sure I’m not the Antichrist, but dark and mysterious things captured my imagination as a kid. I think my interest in these types of books reflected a desire for something beyond my experience. A desire, as Lewis observed, that can’t be fully met in this world, giving us an inkling that we were made for another one. Of course, my parents may say that all this was prophetic of my teenage hell raising.

All these books stirred my imagination in one way or another. But I followed their stories the way medievals learned their Bible, from images more than script. For a variety of reasons I was slow to read (laziness was no doubt high on the list). This probably explains why I gravitated toward drawing instead of writing as a kid. But my stubborn illiteracy somehow served, ironically, to enhance my first real literary experience, because it wasn’t a mere personal experience but a mediated and communal one.

My mom helped baptize me into the magic of books when she read Bunnicula to me. 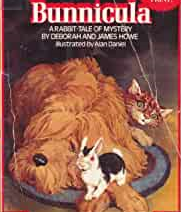 Yep . . . it’s a book about a vampire rabbit. This newcomer to the family didn’t leave behind drained bodies, but the pale white corpses of vegetables. As a kid I secretly wished the rabbit drank real blood, maybe even the blood of his suspicious new roomies, the family cat and dog. Even so, the story inspired my imagination. It was the first time I really experienced what a book could offer: an engrossing story that intrigues and delights, coupled with good art, and a mutual interest. I was initiated! It was the first time I felt the “joy” C. S. Lewis wrote so eloquently about.

I’m pretty sure things born of genuine love never really die. Thus I suspect my love of books born of a mother’s love will abide, for “love is stronger than death” (Song 8:6), “love never fails” (1 Cor 13:8). So, if I’m ultimately found to be a good and faithful servant, maybe the Father of lights will appoint me a scribe in his kingdom . . . a lore master or something. Whatever the case, I’ll always be thankful for books and the transformative experiences they offer.

What about your first literary experience?